Thanksgiving is here and in the spirit of the holiday we will be thankful for Thanksgiving and take to look back on how this day became an American tradition.

The Thanksgiving we know and celebrate today comes from the harvest feast that the Native Americans and Pilgrims shared at Plymouth in 1621.  Both cultures had their own version of a harvest celebration, and the feast took portions of both and combined the European and Native Americans traditions.

The tradition was celebrated thereafter as an anniversary for the Plymouth colony.  Until 1863, Thanksgiving was celebrated on different days in different states.  President Abraham Lincoln made a presidential proclamation that Thanksgiving should be celebrated on final Thursday throughout the United States in an attempt to create unity throughout the nation. This remained in affect until 1941 when President Franklin Roosevelt moved the celebration one week earlier to the fourth Thursday of the month, as well as proclaiming it an official national holiday.

For many of us Thanksgiving is a time to give thanks,  catch up and break bread with family, and also loosen our belts a little.  Every family’s feast is unique, but there are of course several items without which we could hardly consider it a real Thanksgiving dinner, these include:  Turkey, Mashed Potatoes and Gravy, Cranberry Sauce, Biscuits, and of course Pumpkin Pie.  But even if we gourge ourselves with food to the point where our stomachs feel like they’re going to burst we remember that Thanksgiving is most importantly  a time for us to be with family and friends, and to look back on the year and realize all the things we have to be thankful for in our lives. 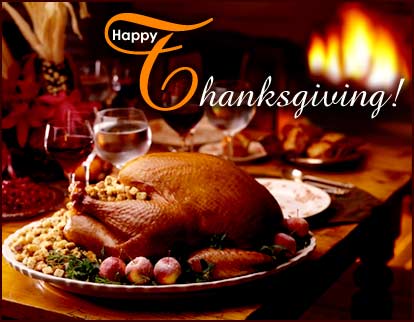 Last Week for the Food Drive!Boy Scouts and Seniors working together
Scroll to top